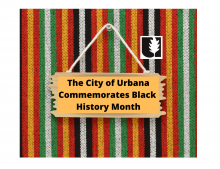 Locally, here in the City of Urbana, it is also a time to commemorate the countless contributions of Urbana African Americans that have enriched every fiber of the vibrancy that exists in Urbana today. While commemorating these efforts, The City also acknowledges that many Urbana African Americans have also lived through and surmounted the scourge of segregation, racial prejudice, and discrimination. The City of Urbana wholeheartedly recognizes the ongoing struggles that her African American citizens have had to endure to fairly level the environment in which they work, play, and live.

The City of Urbana reveres, celebrates and remembers the great contributions of our African American brothers and sisters, and we say, "Thank you."

There are many great events in and around Urbana celebrating BHM:

A little area historical reading: The Under Ground Railroad in Champaign County: Central Illinois history is often intertwined with that of railroad history. The city of Champaign, along with several other Champaign County towns and villages, were formed when the Illinois Central Railroad line was constructed in the 1850s. But, what about the secret railroad network without trains or tracks that existed in the 19th century? Before the abolition of slavery in America, the Underground Railroad was a network of safe routes and houses in the United States and Canada used by African-American freedom seekers and allies to help enslaved individuals escape to free states, and sometimes to flee the country. Abolitionists and other individuals with anti-slavery sentiments provided Underground Railroad “passengers” with food, shelter, and guidance to other “stations.”  Go here to read this entire article, provided by The Urbana Free Library Historical Archives.

Keep checking this page as new events are added.