Urbana Mayor Diane Marlin is joining with dozens of mayors nationwide in decrying President Trump’s decision Thursday to withdraw from the Paris Climate Accord. 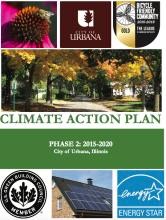 “I was dismayed by the president’s decision,” Marlin said. “But despite what happens at the national level, Urbana and other cities will continue our commitment to reduce greenhouse gas emissions to alleviate the impacts of global warming under the bipartisan leadership of the U.S. Conference of Mayors and the Mayors National Climate Action Agenda, also known as Climate Mayors."

Marlin noted that Urbana adopted its first Climate Action Plan in 2013 and updated the plan two years later. The climate plan calls for a 25 percent reduction in greenhouse gas emissions in the community by 2020, from a 2007 baseline.