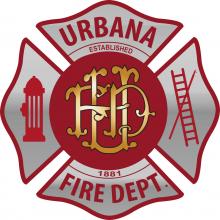 Mayor Diane Marlin intends to appoint Kent “Demond” Dade to serve as the next Fire Chief for the Urbana Fire Department. Dade currently serves as the Deputy Fire Chief for the City of Urbana since 2021. He will take over the duties of current Fire Chief Charles Lauss, who retires on May 5.

Dade was previously with the City of Quincy Fire Department for more than 20 years, where he was promoted to Deputy Chief of Administration in 2019. He has also been an instructor at the Illinois Fire Service Institute (IFSI) for the past four years and is an Illinois Firefighting Medal of Honor Committee member, which is a position appointed by the Governor of Illinois.

“I am humbled and excited to accept the appointment as the Chief of the Urbana Fire Department. It is a great honor to assume this role and navigate the divergent change that challenges all fire departments. It’s very gratifying to serve a group of individuals that share a distinct commitment to confront and settle any adversity,” Dade said. “As Chief, I pledge to support and empower our firefighters as they serve the community and cultivate collaborative endeavors between the department, city administration and city council.”

In 2021 the City of Urbana Fire Department added the position of Deputy Fire Chief to its leadership and Marlin intends to appoint current Battalion Chief Kyle Hensch to the vacancy left by Dade. Of his appointment Hensch stated, “I am honored to serve alongside Chief Dade in this new capacity and I look forward to the challenges that lie ahead.”

Hensch began working with the City of Urbana in 1998. He started as a Firefighter and moved through the ranks of Company Officer/ Lieutenant (2006 - 2013) and Captain (2013 - 2014), before he was promoted to Division Chief in 2014. He currently serves as Battalion Chief, managing day-to-day shift operations, is a licensed EMT-I, and holds a number of certifications related to fire service.

Mayor Marlin is excited to welcome both appointees to their new roles.

“The new leadership team of Demond Dade and Kyle Hensch reflects many years of experience in the Fire Service, including operations, emergency medical, public education, training,  disaster preparedness, administration and  management. We thank Chief Chuck Lauss for his service to the City of Urbana and are grateful for the smooth transition in leadership,“ Marlin said.