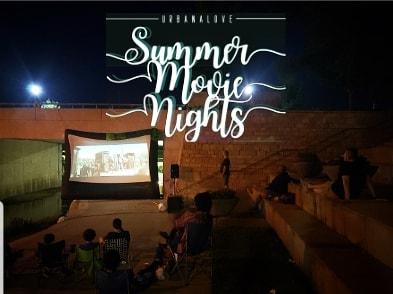 The Urbana Arts and Culture Program and The Urbana Free Library in partnership with Kanopy present Urbanalove Summer Movie Nights, indoor and outdoor movie screenings throughout the summer in conjunction with Urbanalove!

This month, we're delighted to feature the World first biopic created out of 65,000 oil paintings chronicling the life of Vincent Van Gogh, Loving Vincent. Popcorn and popsicles will be available for purchase. The film will screen at sundown (estimated 8:30 p.m.). This event is free and open to the public.

Synopsis: “We cannot speak other than by our paintings,” Written by Vincent van Gogh in a letter the week before his death, Loving Vincent brings the paintings of Vincent van Gogh to life to tell his remarkable story. Every one of the 65,000 frames of the film is an oil-painting hand-painted by professional oil-painters who travelled from all across Europe to the Loving Vincent studios in Poland and Greece to be a part of the production. As remarkable as Vincent’s brilliant paintings, is his passionate and ill-fated life, plus his mysterious death.

On August 29, venture to Broadway Food Hall for the award-winning, Kedi: The Cats of an Ancient City.

Learn more about Kanopy: Kanopy is an on-demand streaming video platform for public libraries and universities that offers viewers a large collection of award-winning films and documentaries. With your The Urbana Free Library card, you can stream over 30,000 feature films, documentaries, foreign language, and short films. Kanopy includes children's programming with its subdivision Kanopy Kids; all members have access to the children's videos section with their library card account. Cosponsored by 25 O'Clock Brewing Company and Broadway Food Hall. For a full listing of Urbanalove Summer Movie Night films, go here.