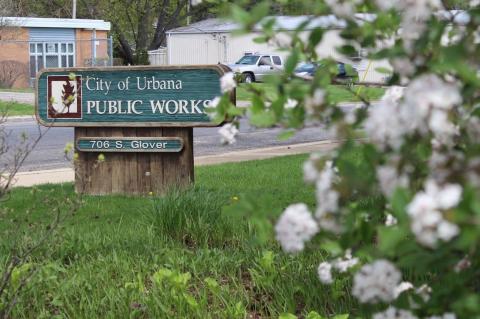 Urbana, IL.—After an extensive nationwide recruitment process, the City of Urbana is pleased to announce the selection of three finalists for the position of Public Works Director. In alphabetical order, the candidates are:
•    David Clark
•    Leslie Gioja (pronounced JOY-uh)
•    Roland White
Biographies of each candidates are provided below.
The City of Urbana will conduct in-person interviews on Friday, November 22, 2019. The on-site selection process is designed to provide an opportunity for a broad cross-section of City staff, officials, and residents to learn more about each candidate, as well as provide the finalists with an in-depth overview of City operations. A public forum to welcome the candidates will be held from 11:30 a.m. to 1:00 p.m. at the Illinois Law Enforcement Alarm System (ILEAS), located at 1701 East Main Street in Urbana. Members of and stakeholders in the Urbana community are cordially invited to attend.
Carol Mitten, City Administrator and Interim Public Works Director, noted, “We are excited about these finalists, and we are confident in each of their abilities. This final phase of the selection process is really about who is the best fit for our Public Works organization and the City overall, so employee and stakeholder feedback at this point is critical.”

•    David Clark holds more than 40 years of experience in the engineering field. He currently serves as Vice President at ESI Consultants, Ltd., where he is responsible for managing the Charleston regional office. In this capacity, he oversees ESI’s planning, design, construction, marketing, and administration for the southern two thirds of Illinois. His project involvement has included the Olympian Drive construction management over the Canadian National Railroad in Urbana, the City of Champaign’s Annual Concrete Street Reconstruction Program (2009-2016), the Church Street Reconstruction from Neil to First Streets in Savoy, the Historic Lincoln Park Multi-Use Path planning and design in Danville, and the Northview School Safe Routes to School project in Rantoul, among others. Prior to accepting this position, he was employed by the Illinois Department of Transportation (IDOT) in multiple capacities from 1977-2004. At IDOT District 4 in Peoria, he served as Construction Engineer, Studies and Plans Engineer, and Implementation Engineer where he supervised more than 90 employees and oversaw projects including I-74 reconstruction, major river bridge design projects, and various overlay, patching and intersection improvement projects. Upon assuming the District Engineer position at IDOT District 5 in Paris, he was responsible for leading over 500 employees across a 12-county area of east central Illinois. Significant projects he was responsible during his tenure included the I-57/Curtis Road interchange and the I-70 reconstruction.  David holds a bachelor of science in civil engineering from the University of Illinois at Urbana-Champaign and is licensed as a professional engineer in Illinois and Indiana.

•    Leslie M. Gioja earned BS and MS degrees in civil engineering from the University of Illinois (UIUC), served 4 years as a submarine officer, and lived in the Champaign/Urbana area ever since. Currently working for the Army Corps of Engineers, he is the Facility Engineer in charge of the Champaign branch of the Directorate of Public Works at the Construction Engineering Research Lab. The past 7 years have been devoted to planning, preparing, and executing projects in collaboration with UIUC that have made the facility more secure, usable, accessible, safe, and efficient. He led a team that was recognized by the Army Corps of Engineers and the Department of Energy for energy conservation. Les served the Village of Mahomet for 8 years, simultaneous as Village Engineer, Zoning Administrator, Building Inspector, GIS Consortium Representative and Project Manager. While there, he oversaw subdivision development, building permits, ordinance revisions, facility evaluation and maintenance, and village construction projects, including Bridle Leash Park. He also established and supervised a small village engineering department. As an associate, engineer and project manager for Daily and Associates, Engineers, Inc., Les designed, reviewed, and oversaw private and government projects. Notable local projects included the Mattis Avenue post office, round bridges on the UIUC engineering quadrangle, and the Urbana Country Club bridge. He has also served the poor, homeless and helpless of our community by volunteering with CASA, Restoration Urban Ministries, the Refugee Center, and the Canteen Run. Les also enjoys teaching, acting, writing, growing healthy food, and befriending internationals.

•    Roland White lives in Urbana, Illinois and is a senior consultant at Fehr Graham Engineering in Champaign, managing a dynamic team to provide a wide variety of services for municipalities, park districts, sanitary districts and highway departments. Previously, he served as the lead Civil Engineer for the University of Illinois at Urbana-Champaign where he collaborated with intergovernmental partners, campus stakeholders, students, alumni and community members to deliver major projects, including Siebel Center for Design, State Farm Center renovation and MCORE. Roland works collaboratively with labor unions and has developed strong professional relationships throughout Illinois. As Champaign’s City Engineer, he led a team of 27 engineering and operations employees at Public Works, partnering with diverse neighborhood groups and community members to deliver services and implement transformative infrastructure projects, managing a $22M annual capital improvement budget. He actively participated in economic development efforts and management of emergency response, including snow and ice removal operations. Roland is a licensed professional engineer with BS and MS degrees from the University of Illinois. He has over 25 years of experience guiding diverse teams, teaching leadership skills and fostering a customer-focused service approach. Roland also enjoys spending time volunteering and enjoying downtown Urbana with his family.
###

Arts Grant Drop-In Hours
12/04/2020 - 2:03pm
NOTICE OF LOTTERY (February 23, 2021 Consolidated Primary)
12/01/2020 - 11:57am
A lottery is initiated when two candidates for the same position file papers of candidacy at the same time on the first day of the filing period.
Urbana Economic Support Grant
11/30/2020 - 1:33pm
2021 Urbana Arts Grant: Tiers I, II, and Arts in the Schools Deadline
11/18/2020 - 5:06pm
The City of Urbana Arts and Culture Program announces the opening of the 2021 cycle of its Urbana Arts Grants Program. Up to $90,000 will be awarded to artists, arts organizations, and festival presenters for creative projects that enrich the lives of Urbana residents and visitors.
Ameren Announces Energy Shut-Off Moratorium
11/30/2020 - 6:48pm
COLINSVILLE, Ill.-- Ameren Illinois announced that it will be suspending disconnections for the winter months through March 31, 2021.
END_OF_DOCUMENT_TOKEN_TO_BE_REPLACED