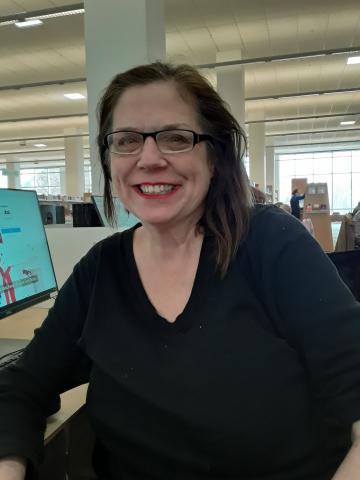 A new media production firm, Transcendence Broadcasting Inc., announced its formation today and the opening of a new office at Co-Lab, Inc., 206 West Main Street, Urbana. The firm is headed by two veteran producers whose work is regularly seen on PBS-TV and heard on public radio and seen on the silver screen, Nancy and Gene Koprowski.

The couple recently relocated to Urbana-Champaign from Chicago, where they had spent the last 25 years, producing content for some of the world's leading media brands, including PBS, CBS Newsradio, Fox News Channel (Online), The Wall Street Journal, and Forbes Magazine, among others. Previously, they worked in Washington D.C. and New York City, and also reported on stories from London and Amsterdam. The plan is to produce content that "transcends" old and new media boundaries, said Nancy Koprowski, who is chief operating officer of the firm, and an executive producer. "We are grateful to the City of Urbana and the Small Business Development Center for their assistance with the new start-up."

The firm will work with local and regional talent, and resumes for voice-over and acting talent should be sent to genek@alumni.uchicago.edu. The producers' most recent film, The Frank Capra Story: A Wonderful Life, about the career of the famed directed Frank Capra, is airing on WTTW/PBS Chicago this Christmas season on December 29 and December 30, and is streaming currently nationally on PBS Passport. It will also be broadcasted on our own Urbana Public Television, UPTV6 at 10:30 p.m., Thursday, December 19, 2019. Go here to view. The film made its silver screen debut last spring at the American Documentary Film Festival (Amdocs), where it was an Official Selection on March 31, 2019 and was screened a second time as a fan favorite on April 4, 2019 in Palm Springs, Calif. at the Camelot Theater. Their next film project is an educational documentary on the 80th Anniversary of Bugs Bunny's screen debut, called, On With the Show! which will be released next year on public television.

$100,000 Given for Trees
05/06/2021 - 12:34pm
Below is the speech that Mayor Diane Wolfe Marlin gave to attendees at a celelbration on Arbor Day, 2021:
Local Law Enforcement Agencies Discontinue Prescription Drug Collection Box Program
05/05/2021 - 1:21pm
What is Imagine Urbana All About?
05/03/2021 - 4:30pm
VOTERCADE AND CELEBRATION VILLAGE FOR VOTING RIGHTS
05/01/2021 - 11:37am
UPTV Wins Regional Media Awards
04/27/2021 - 9:58am
The City of Urbana is pleased to announce Urbana Public Television will receive two awards at the 9th Annual Best of the Midwest Media Fest and Awards Show.  The show recognizes the best community access television programs in the Midwest.
END_OF_DOCUMENT_TOKEN_TO_BE_REPLACED