Mathew W. Busey (1798-1852), considered a founder of Urbana and one of the most influential residents of Champaign County, settled in what is now west Urbana in 1832. As a state legislator, Matthew Busey saw to it that railroad routes included Urbana. Following his death in 1852, his heirs, including son Samuel T. Busey, were involved in the development of Urbana. The 800 block of W. Main Street was platted for residential development in two phases. The south side of the block was platted first in 1853. In 1867, the north side of the block was included in a subdivision by Samuel Busey called Col. M.W. Busey’s Heir’s Addition to Urbana. Samuel Busey, who served as a General during the Civil War, was cofounder of Busey Bank in 1868, served as a five-term Mayor of Urbana, and U.S. Congressman. The earliest surviving structure in the proposed district, 804 W. Main, reflects the affluence and social standing of its first resident, Matthew E. Busey (b. 1829). Next door at 806 W. Main is the house of David Busey, son of Matthew E. The house at 803 W. Main was constructed for Jairus C. and Eunice M. Sheldon. Mr. Sheldon, a local attorney said to have been associated with Abraham Lincoln, and a State legislator and Senator. Mr. Sheldon was a strong supporter of the University of Illinois and helped fund construction of its first new building.

The strongest properties in the district are on the east end of the block. 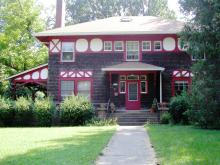 803 W. Main is a particularly fine example of the Shingle Style of architecture most popular in the last few decades of the 19th century. 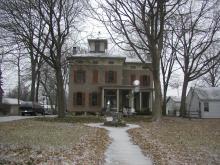 804 W. Main Street is an excellent example of Italianate architecture and, constructed circa 1878, is one of Urbana’s earlier surviving structures. Additionally, the property is associated with Matthew Busey whose family, more than any other, is responsible for the growth and development of early Urbana. Although replacement front porch columns marginally reduce its integrity, the character-defining features such as cupola, under-eave brackets, and window blinds, make this an outstanding landmark-caliber property.

Other strong contributors to the proposed district include: 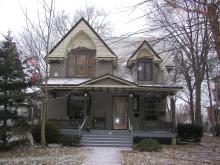 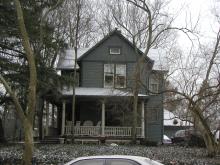 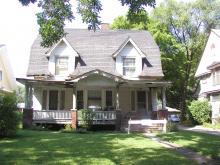 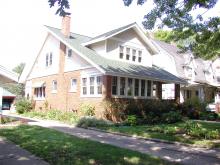