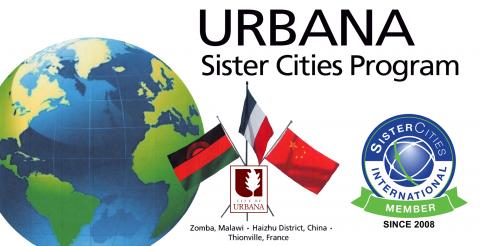 Sister Cities partnerships are created through friendships developed between residents of Urbana and citizens in other countries around the world, are chartered by Sister Cities International, and approved by the Urbana City Council.

Sister Cities International is a nonprofit citizen-based diplomacy network that creates partnerships between towns and cities in the U.S.A. and similar communities around the globe, striving to build international cooperation at the municipal level, promote cultural understanding, and stimulate economic development.

The Sister Cities program was created in September, 1956, by President Dwight D. Eisenhower following the end of WWII during a White House conference on citizen diplomacy. The positive response to this meeting lead tens of thousands of individuals to pledge their support to help create a free and peaceful world. Sister Cities International’s programs continue the effort to motivate and empower private citizens, municipal officials, business leaders, and community volunteers to build long-term Sister Cities partnerships which honor these high goals.

Sister Cities International’s Mission Statement is to . . . “Promote peace through mutual respect, understanding, and cooperation—one individual, one community at a time.”

The City of Urbana is a member of the Illinois Sister Cities Association (ISCA), a state organization which supports the goals of Sister Cities International. Over 40 cities in Illinois that have established global partnerships are members of the Illinois Sister Cities Association. An annual meeting is held each year that is hosted by a member community. Urbana hosted the Association’s 2014 Annual Meeting. Urbana Alderman Dennis Roberts has served two terms on the ISCA Board of Directors (2009-2012 and 2012-2015). ISCA Information

The City of Urbana has been active in the community for more than 10 years. During that time Sister cities relationships have been forged and exchanges have been made, bringing foreign delegations to Urbana. A summary of its activities and accomplishments can be found at A Short History of the Urbana Sister Cities Program.

The Urbana Sister Cities Committee meets on the 3rd Wednesday of each month at 5:30 p.m. at Strawberry Fields Cafe, 306 W. Springfield Ave in Urbana.
For further information, contact: