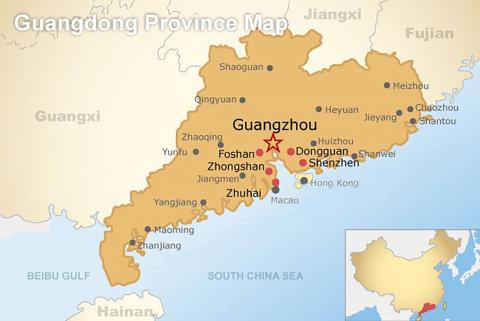 Haizhu District (population 1 million) is one of several districts in the city of Guangzhou (population est. 13,000,000 in 2019) in south-central Guangdong Province. Guangzhou is located on the Pearl River, China’s third largest river, 80 km north of Hong Kong. Legend has it that in ancient times its citizens were saved from famine by the arrival of the Five Immortals, who appeared in the village riding five rams bearing stalks of rice. The city is thus known as “Five-Goat City,” and also “City of Flowers.”

Urbana’s initial contact with Guangzhou was made by Mayor Laurel Prussing, who was invited to join a delegation from Sister Cities International traveling to attend an International Water Quality Summit in China in 2010. A “Memorandum on the Establishment of Friendly Relationship between the City of Urbana, Illinois, The United States of America and Haizhu District, Guangzhou City, Guangdong Province, The People’s Republic of China” was received by the Mayor on May 18, 2012. On May 29 and 30, 2012, a delegation from Guangzhou City, led by Mr. Hongan Ma, visited Urbana. The delegation met the Mayor and staff, toured the city, and enjoyed a dinner at Silver Creek Restaurant before continuing on to other destinations.

In 2013 Urbana was invited to participate in the Sino-African Initiative a grant program funded by the Bill and Melinda Gates Foundation managed through Sister Cities International. Urbana sent a delegation to China to strengthen our Sister Cities Partnership with the Haizhu District of Guangzhou City, China during August, 2013. The aim of the visit was to form a formal partnership and invite the Chinese to participate in the tri-lateral SAI grant project. This project was designed to bring together a city in the U.S.A. and their Chinese Sister City as partners to collaborate with the African Sister City to improve sanitation and health in the African community. Work was accomplished over a two year period (2012–2013) as members of the team traveled back and forth between China and Africa as part of the project. The successful completion of the SAI grant project culminated in a closing conference and award ceremony held in Washington D.C.

Our most recent international exchange has been a delegation of Chinese diplomats coming to Urbana in 2015. The Chinese visitors toured Urbana, the University campus, and Urbana’s public schools. They observed a Chinese culture and language class at Dr. Martin Luther King Jr. Elementary School.

We look forward to continuing our sister Cities friendship with Haizhu through exchanges and other creative projects.