In 2009 Sister Cities International announced an innovative grant program for American cities with African partnerships, the African Urbana Poverty Alleviation Program (AUPAP). This grant was funded by a $3.5 million grant from the Bill and Melinda Gates Foundation to address poverty issues and sanitation in Africa. The grant’s focus was to be on relationships between American cities that had established Sister Cities partnerships with African communities.

Based on its newly established Sister Cities partnership with Zomba, Malawi, Urbana applied for participation in this grant program. During the second year of the administration of this grant, Urbana was awarded $115,000.00 to work with its African partner, Zomba, Malawi, in designing a program to improve sanitation, health, and clean water facilities in the target community.

Over the following three years volunteer members from the Urbana Sister Cities program worked with Zomba City Administrative staff, local community leaders, neighborhood representatives, and tribal authorities to locate, design, and build new toilet facilities in three primary schools selected by the Local Community Council. This project emphasized grass roots participation in all levels of decision making as a means to build self-reliance and instill initiative in communities with the greatest poverty and communities that traditionally lacked a voice—especially the voice of women—in local matters. All materials and labor were secured within the local community, providing an economic stimulus to local businesses. The project built 16 new VIP drop toilet units for young school children at Chalomwe, Thundu, and Chikamveka Primary schools.

Chikamveka Primary enrolls 3,200 students who are taught in 10 covered classrooms and 30 “open air classrooms” in the school yard. The school had only 8 toilet stalls (3 boys, 3 girls, and 2 staff stalls). The Urbana Sister Cities Committee built two new toilet buildings at this school, adding 8 boys and 8 girls stalls. The girls’ stalls were supplied with doors that locked. In a community with very high early pregnancy rates, having a door to lock when using the restroom is considered to be an essential innovation to keep young women in school.

The Guardian Village, attached to Zomba Central Hospital, is a community center where relatives of ill family members stay next to the Hospital as they care for and feed family members who are receiving medical treatment. The conditions at the Guardian Village were desperate: a large trash mound of rotting produce and trash, populated by an assortment of chickens, stood next to the single water tap not far from the communal cooking house where food was prepared.

The AUPAP grant funding provided construction of a new 30x70 ft. Ablution Block providing toilet stalls and shower facilities for both men and women, plus an outdoor laundry and enclosed drying yard. The Ablution Block facility was built by local laborers to a design drafted by city engineering staff. 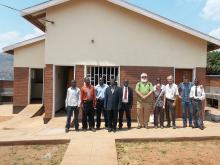